Weighing up the economics of dairy farms – Deborah Meaden says “I’m out!” 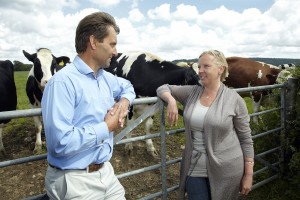 Today (Friday 9th Sept), after nearly 10 months working on the briefing along with farmers, dairy consultants and WSPA staff, the report “weighing up the economics of dairy farms” has been published with a foreword from Deborah Meaden of Dragon’s Den fame.

I’ve previously published on this website my thoughts on the implications of the superdairy on UK dairy farming, “Economic review of a superdairy”, and this research published by the World Society for the Protection of Animals (WSPA) expands on my argument and offers a credible economically viable alternative to dairy farmers based on low cost production from grass. http://media.wspa.org.uk/UKWEB/NIMC_PR_downloads/FOR_THE_PRESS.pdf

I believe that this is an important piece of work looking at the financial viability of the superdairy model, the likely impact on existing family farms, and identifying credible financially viable alternatives.

That’s hardly surprising because there is very little published analysis in the public domain. And in the absence of published analysis it’s very difficult to understand how the National Farmers Union, government and industry bodies like DairyCo amongst others can give their unqualified support to the advent of the superdairy.

Now I hope that with the benefit of this report all of us with an interest in the countryside and milk production can have an informed debate on the economics of the dairy sector and securing a financially viable sustainable future for our dairy farmers.

This entry was posted in Superdairy. Bookmark the permalink.