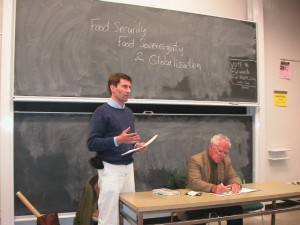 By Peter Lundgren, Lincoln, England. Founding member of FARM, the independent voice of farmers in the UK, www.farm.org.uk

In his book, aptly entitled, “The End of Agriculture in the American Portfolio,” economist Steven Blank concludes that consumers in the United States no longer need farmers because the US can import food cheaper than US farmers can produce it.

This short-sighted version of agriculture, trumpeted by economists around the world, has been accepted by governments without questioning the implications of such a policy on the future welfare and sustainability of family farms, the environment and rural communities.

There are many definitions and much debate about what constitutes a family farm.  However FARM believes that the family farmer is more defined by general attitude, outlook and husbandry than by any specific acreage, sector or practice — it is an inclusive rather than exclusive definition.

And governments appear to recognize the values and commitment inherent in family farms and indeed a wish to sustain them.

To quote the UK government, “We want to see opportunities for farmers both small and large to thrive into the future.”  And “There is a high level of commitment to the industry … we need to support that commitment in the long term.”   Stating an opposition to creating, “… a polarized countryside … with some areas zoned for intensive production while others are turned over to environmental theme parks.”

While FARM welcomes government commitment to family farms and the countryside, government policy reflects a failure or unwillingness to consider the bigger picture and the global context in which farmers are appearing or to confront the real forces driving the decline in family farming profitability and sustainability — not just in the UK and US, but globally.

This failure to look at the big picture has resulted in government failing to identify, or choosing to ignore, the real causes behind the decline of, and the pressures on, family farms globally.

There may not be a conspiracy behind this but there is most certainly lack of understanding, willingness or courage by governments to confront and challenge the forces driving what FARM sees as the negative changes for family farming and food production globally.

Further the failure to confront these forces has resulted in a series of contradictory, inconsistent and irreconcilable demands being placed on farming and food production.

The UK government itself highlights the puzzling conundrum inherent in its vision and analysis, “UK taxpayers are spending £3bn … consumers are paying more for their food … farm incomes are on the floor … the environment has been damaged … the social fabric of the countryside is being put at risk … consumers are concerned about food safety … nutritional standards are poor.”

How can these multiple contradictions have come about leaving taxpayers, consumers and farmers out of pocket?  With both £3bn of subsidies and higher food prices then surely farmers (or at least a significant percentage of farmers) must be making a killing!

The key unstated question which is nor directly addressed by government is:  if its not the farmers, then who is making the money

The UK government illustrates the proportion of gross value apportioned across the UK food chain.  Of the gross value of the UK food market £6.6bn goes to farmers and primary producers and £37bn to processors, manufacturers and retailers.

Governments follow up questions should be:  “Are theses relative proportions fair, justified and in the public interest?” and “Are they likely to encourage the type of farming and produce the type of food that governments say they want?”

That is “… a profitable and sustainable farming and food sector, that can and does compete internationally, that is a good steward of the environment and provides food and a healthy diet for people around the world.”

The answer is “NO!”  The relative proportions are not fair, nor justified, nor in the public interest and they are not likely to encourage they type of farming wanted.

The real choice for governments and peoples is between family farms and agriculture or agribusiness.

It cannot be a solution to suggest that family farmers, whether in the US or in the UK, acknowledged as they are for providing wider benefits to society and the environment, should be swallowed up and integrated into vast corporate farms if they are to survive doing business with giant agri-supply, food processing and retailing businesses that dominate the food chain.

Yet if they don’t, under present economic and policy models, they won’t survive.  And if they are forced down the “bigger is better” route they will no longer be family farms providing those wider benefits.

And that is the central contradiction in government’s economic analysis.

This entry was posted in Lectures, talks and after-dinner speaking. Bookmark the permalink.