Brazil: the availability of GM-free soybeans

Peter Lundgren visited the Imcopa GM free soy plant at Araucaria , Parana as part of a trip to Brazil looking at the future availability of GM free soya for both the domestic human food chain and animal feed chain in the UK and Europe. 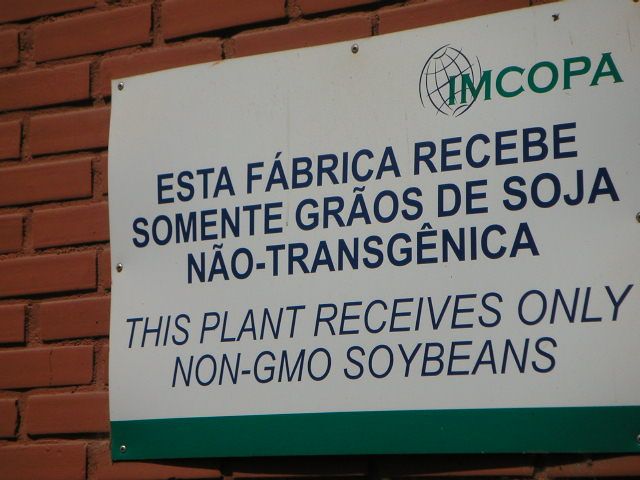 The queue of trucks waiting to tip their loads of GM free soy disappeared into the distance. The plant takes 2,000 tons a day and the waiting trucks blocked one lane of the highway as far as the eye could see.

As each truck came to the entrance of the facility its load is tested for traces of GM contamination and if detectable levels of GM is found the truck is diverted away from the GM free facility, before it even enters the gates, to another facility that handles GM soya for domestic purposes only.

And this was just the beginning of the precautions taken by Imcopa, Brazil’s biggest exporter of GM free soya to Europe to the supply chain leading to European markets can be guaranteed as 99.9% GM free.

After entering the facility each 50 ton truckload is again sampled before tipping. Overnight these samples are checked again by the independent certifier Cert-ID and only then is the whole day’s intake certified as GM free suitable for export to the EU.

By taking these extreme measures Imcopa is able to deliver around 2 million tonnes of GM free soya to Eu guaranteed below 0.1% contamination – or as Imcopa likes to put it 99.9% GM free.

And Imcopa is not the only major supplier to Europe. Bunge, better known as one of the largest shippers of grains around the world has a bespoke GM free facility in Bahia, further north than Parana, and exports around 500,000 tonnes of GM free soya to the UK every year. Bunge even admit that GM free is a very profitable business for them because the cost of purchasing GM free soya from producers and the cost of identity preserving the soy until delivered to markets in the UK is far less that the premiums being paid in the UK for GM free.

There is plenty of evidence that soy producers have benefited from the huge increase in soy production, as have the individuals and communities that are dependent on a viable sustainable agricultural system.

There are huge problems in Brazilian agriculture with land rights, environmental impact, and grinding poverty but at the same time the evidence of increasing wealth and access to education and healthcare in the soy growing regions would indicate that the there are some benefits.

With seven major co-operatives representing 35,000 farmers Imcopa is aware of the need to demonstrate its environmental credentials to its customers by signing up to the Pro-Terra certification for sustainable practices.

The independent Pro-Terra certification mark was introduced to help suppliers assure their buyers, and ultimately consumers, that their products have been produced sustainably, have not caused deforestation, that child labour is not used and the use of renewable energy.

Both companies go to great lengths to ensure their supply chain, from testing the farmers seeds right through to sampling the bulk carriers, is at or below detectable levels to ensure that their customers can have confidence in their product.

And there is no sign that European consumers are softening their anti GM opinion. To the contrary all the evidence suggests that resistance to GM in food is strengthing. All UK supermarkets are GM free –they don’t even bother to advertise their GM free credentials anymore as its just an accepted fact of the market – even the poultry industry in the EU is GM free as is poultry from around the world that wants to gain access to the EU market.

The only major markets in the EU for GM soya is for pig industry and to a lesser degree the dairy industry – and there is increasing pressure led by the small supermarket chains to source pig meat and dairy products derived from GM free animal feeds.

Undoubtably, as in the USA, there has been a huge increase in the planting of GM crops in Brazil and the Brazilian government has been forced into legalising the growing of GM soy varieties but unlike the US, Brazil has been able to maintain its segregation and separation to ensure that valuable markets are not lost.

Even with year on year increased plantings of GM soy both companies are confident that, with these measures in place, in the worst case scenario contamination will not exceed 0.3% contamination in the foreseeable future.

And all this from a country whose agriculture and infrastructure many in Europe and the USA would consider inferior to our own.

But lets face it this is a new profitable market for Brazil that the US soy trade has given up without a fight. By failing to separate and segregate GM from GM free the USA has lost the confidence of the EU food retailers and food processors and along with than confidence they have lost the valuable premium markets in Europe and Japan – the two major premium export markets in the world.

By losing access to these premium markets the US soy trade has accepted that it has to discount its product to gain access to markets that are price sensitive – or look to the biofuels market to clear their excess production by effectively burning their food as fuel.

This entry was posted in GM Campaign. Bookmark the permalink.